Since 2014, TECHNOLOchicas has highlighted powerful stories of Latina technologists from diverse backgrounds and environments who recognize the power of innovation to change the world. Since 2007, Aspirations in Computing has built a community of more than 22,000 women, genderqueer, and non-binary people from all backgrounds. Bringing TECHNOLOchicas into the Aspirations in Computing community amplifies the power that these two programs can have by working together. 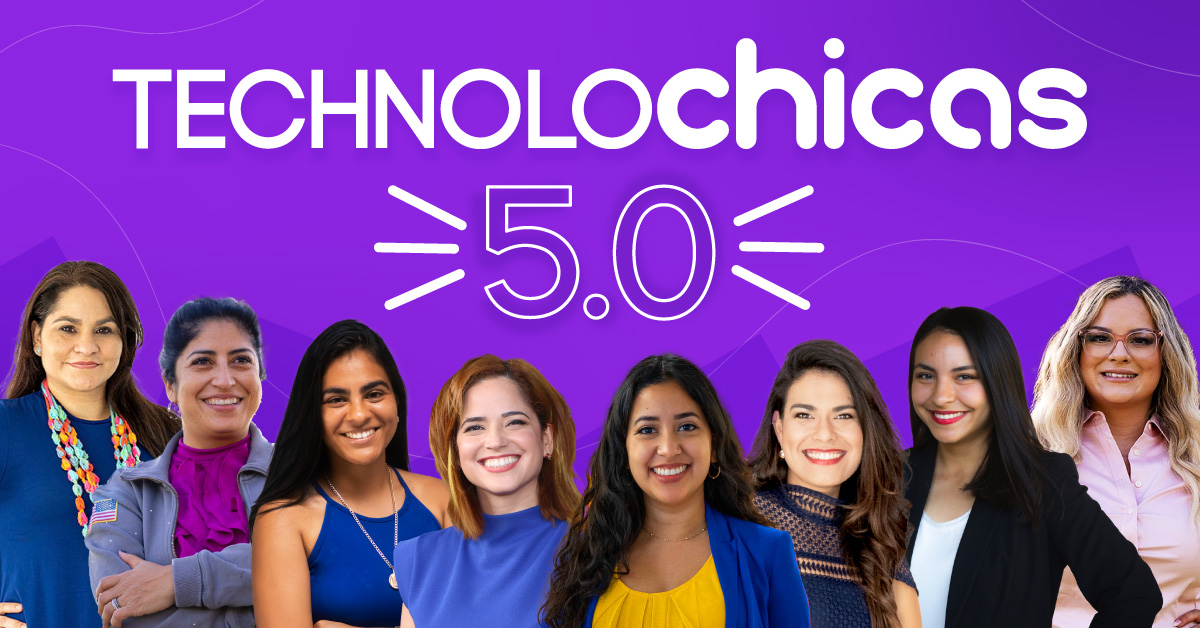 NCWIT Aspirations in Computing is thrilled to introduce the TECHNOLOchicas 5.0 Campaign Stars! Each of the women featured in this campaign brings her own unique areas of passion and expertise to inspire the next generation of technologists. Below, get to know the newest TECHNOLOchicas, and watch for more videos to be released this spring.

Ali Guarneros Luna is a senior NASA aerospace engineer supporting the Small Satellite Technology (SST) Program at the Space Technology Mission Directorate (STMD), where she manages the Tipping Points program and other small satellites. Ali grew up in Mexico reading about the space shuttle missions, and those early interests led her to study Aerospace Engineering. She has been recognized with numerous awards since beginning her career as a NASA intern, including the Women of Color (WOC) Outstanding Technical Contribution in Government Award and NASA’s Silver Snoopy Award.

Ruth Vela is the Director of Global Technology Experience at Nextiva. As a member of Nextiva’s Technology senior leadership, Ruth works to ensure that technologists have a positive experience and opportunities for growth and development in a challenging, fast-paced, and fun environment. Prior to joining Nextiva, Ruth was a founding leader of a telecommunication startup in Mexico City. After moving to the U.S. in 2016, Ruth soon became part of Phoenix’s robust technology and entrepreneurship communities while continuing to work on international projects. She particularly enjoys Arizona’s cuisine, as the flavors remind her of her native Mexico.

Nery Lara Mancia is a Software Engineer at Qualcomm Government Technologies. Nery was born in San Francisco to parents who had immigrated from El Salvador. Although she did not grow up believing that college was an option, her hard work and commitment to academics led to new opportunities, and she enrolled in the University of California - Santa Barbara, where she decided to major in computer engineering. An internship at the Air Force Research Laboratory gave her the experience she needed to pursue a career in technology.

Laura Robles works at Caterpillar Inc. as an IT Analyst in the Digital and IT Development program. She lived in Mexico till the age of four, when her family moved to Nogales, Arizona; she liked growing up in a border town, as it gave her the opportunity to learn about both Mexican and U.S. cultures. Though she started college as a computer science major, once there, she changed her focus to cybersecurity. She graduated from the University of Arizona in 2021 with a degree in Cyber Operations with an emphasis in Defense and Forensics.

Josephine Vazquez-Rivera is a Senior Software Engineering Manager within the Strategic Platforms Team Organization at AT&T. In this role, she leads multiple cybersecurity teams, including a team of Ethical Hackers who focus on securing customer experiences and back end systems. Josephine’s passions are mentoring upcoming leaders and supporting the development of women of color within AT&T and in the community. In her free time, Josy likes to travel, volunteer and garden.

Melinda Vargas Ramos was born in Mayagüez, Puerto Rico. She is currently a Business and Systems Analyst at Triple-S, but her work experience encompasses a wide range of roles, including: research mentor, math tutor, Department of Education teacher assistant, software developer, and product coordinator. In 2010, Melinda received a Puerto Rico Affiliate Award for AiC after submitting an Android app that she had developed to minimize potential hazards through the use of participatory sensing. She enjoys giving back to her community and promotes computer science related careers through student talks.

Melissa Delgado currently works at Microsoft as an Engineering Program Manager under the Microsoft Digital Privacy Team. In her spare time, she is a compliance strategist and strong preparedness advocate for individuals and small businesses focused on cyber-hygiene, privacy, compliance, and business continuity. She also is writing a book about the basics on cybersecurity in Spanish to serve as a resource in raising awareness and keep her community informed. Her motto is to "adapt and overcome without compromising your values, morals or family."

Zaida Hernandez is a spacecraft engineer at NASA Johnson Space Center supporting the Artemis Program. She works on thermal protection systems for the Orion spacecraft as well as thermal control systems on future lunar vehicles. She began working with NASA as an intern and started permanently in 2017. Zaida received a Bachelor of Science in mechanical engineering in 2015 and Master’s in Industrial Engineering in 2017 from the University of Houston.