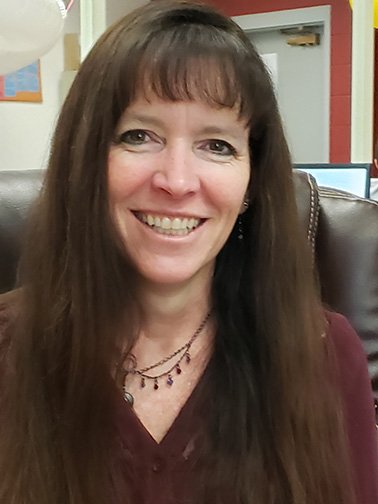 Buffy Smith knows firsthand how challenging it can be for interested students to access computing education when they live in a highly rural state like Montana, because it’s an obstacle she’s faced throughout her career. Buffy first fell in love with computing in high school. A college programming class convinced her to turn this passion into a career, but her college only offered a minor in Computer Science, so she paired that minor with a major in English. After seven years teaching high school English, she was told she could switch to Computer Science if she took some additional summer training. She leapt at the chance, and since then, she has not stopped expanding her knowledge, teaching herself several programming languages and taking graduate classes on Oracle and Python. She has also learned to build robots, fly drones, and use 3D printing technology, because these are topics of particular interest to her students.

Her search for the best teaching practices for high school computing classes has often been a lonely one. As she notes, “There are not many schools in Montana [that] offer computer science, so it is difficult to find other high school teachers to work with.” Throughout her career, she has been keenly aware of the fact that although her home state has a large number of high-paying tech career opportunities, there is a widespread lack of computing instruction. For this reason, much of her extracurricular work has focused on increasing the availability of computing education for students across the state.

Because of her experience, passion, and commitment, Buffy has been part of numerous advisory councils and committees working to attract more students generally, and women in particular, to Computer Science, both in Montana and nationwide. She was part of the first all-female panel to present at InfoSys CrossRoads in 2017, and in that same year she represented Montana at the Governors for CS & K-12 Computer Science Framework Convening hosted by Code.org. As a member of the Montana Computer Science Education Advisory Council, she is currently helping to develop a set of standards that can be used to guide the teaching of Computer Science in Montana high schools, with the eventual goal of introducing a computing requirement for graduation. “A great start for encouraging females and underrepresented populations to pursue IT careers is to ensure that they have actually taken a computer class,” she says, because “I often have students comment that they did not realize how challenging and fun programming could be until they tried it.”

Buffy has received the AiC Educator Award three times. Receiving the award, she reflects, has made her feel an even greater responsibility to help make the computing world more inclusive, both in school and in the workplace. From choices made in the classroom on a day-to-day basis to major decisions about her school’s computing curriculum, she has implemented many changes in her efforts to reduce barriers to women’s participation. She has made her classes more responsive to women students’ needs and interests by introducing different kinds of programs as projects and by adapting the physical environment to be more welcoming. She took additional graduate courses in order to bring classes like The Joy and Beauty of Computing and The Joy and Beauty of Big Data to her school, and she also created online versions of these courses, noting, “Girls who are intimidated in the regular classroom are often more willing to try computer science online, and the online format allows students from schools without a computer science program to take a class.”

She is also very committed to helping students get the kind of real-world computing experience that will better prepare them for tech jobs after graduation. In 2013 and again in 2014, her students made headlines as winners of the Verizon Innovative App Challenge. The 2013 team collaborated with the Helena Fire Department - at their request - to create a functional app that greatly improved the fire department’s ability to accurately track emergency response times. With the money the school received from these prizes, Buffy purchased a VIVE virtual reality system for the Computer Science classroom, and she has plans to learn the Unity platform so that she can teach students to develop their own VR programs.

Awardees
Where Are They Now
In The News