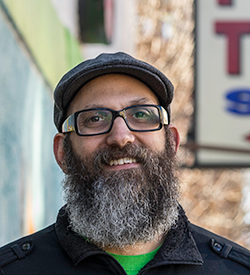 This year’s recipient, Jeff Solin, left a career in the tech industry 17 years ago on what he describes as “a quest to help change Computer Science education.” After several years at Chicago’s Northside College Prep, Jeff joined the faculty at Lane Tech to help develop that school’s computer science department. Since he began teaching at Lane Tech, the department has grown from a single computer science teacher serving a student body of 4,400 to a robust staff of 10 full time teachers of different genders and backgrounds who offer a total of 12 different computing classes.

Equitable access to technology education for students of all demographics is a guiding concern for Jeff, who notes that most of his students are “disadvantaged and underrepresented, sometimes by their gender, sometimes by the color of their skin, sometimes by their family’s resources, sometimes by their documentation status, and usually by a combination of those reasons.” Over the course of his professional development, he found himself moving from an attitude of gender- and race-blindness to a commitment to “advocate, support, learn about the motivations of, and find resources and opportunities for ALL of [his] students.” This has led him to work with a small group of educators from multiple schools to convince the Chicago Board of Education to make computer science a graduation requirement for all students. The team also successfully lobbied for the district to implement the Exploring Computer Science curriculum, an approach designed to address issues of inequality in urban students’ access to critical computer science education.

Jeff is a strong supporter of the maker movement in education, and believes that inviting students into processes that combine civic engagement with designing, tinkering, and creative problem solving is one way to encourage more high school women to explore computer science and other tech offerings. He was the force behind his school’s decision to build the first Maker Lab in the Chicago Public School District, and he has redesigned his lab multiple times to incorporate best practices for creating inclusive learning environments for students of all genders.

“I want this to be a place where [students] can feel comfortable failing by trying and learning by doing," Solin said of his approach to teaching in the Maker Lab. "Things break and wheels fly off and screws are loose, and I have to rebuild things in the true spirit of what the class is."

Maker-themed classes have become some of the most popular offerings at the selective-enrollment, tech-focused high school. As Saood, an alum of Jeff’s classes, shared, "You turn what you make into something real, so you actually see the results. That gave me extra motivation to learn, because I wanted to make better stuff.”

Kyra, another of Jeff’s former students, emailed her former teacher to let him know that his class had motivated her to continue challenging herself with ambitious 3D printing projects so that she could keep her design skills sharp. Notes like these keep Jeff inspired in his work and make it clear that his students have “connected on a personal level with the curriculum, and they saw that things they didn’t think were within reach are very much within reach.”

In one of Jeff’s recent assignments, students collaborated on a large-scale mosaic of the Chicago flag, using laser cutting, 3D printing, and 3D carving to design three-dimensional tiles celebrating various aspects of the city’s many cultures and communities. A blog post in which Jeff shared images of the finished mosaic went viral, and the collaborative work is now touring a host of prominent Chicago institutions, including an eight-month installation at Navy Pier. One local news website called the piece “a work of civic-pride genius.”

Jeff is always continuing to seek out new professional development opportunities, and he sees his pedagogical approach as explicitly aligned with the work of NCWIT. He draws from resources produced by NCWIT, among others, to support teaching practices based on “providing equitable learning opportunities, building communities and support structures, and helping to show all of [his] students that their voices are needed, and that without diverse approaches to solving problems, we end up with solutions that serve the few instead of the many.”

Awardees
Where Are They Now
In The News